Light pollution. Noise pollution. Plastic pollution. Rising sea levels. Rising temperatures. Climate change has brought about much impact to the world around us. Join us as we dive headlong into these environmental issues and investigate how Singapore and Singaporeans perceive and handle these problems. In support of the WWF Young Reporters for the Environment competition.

Known for the iconic Rafflesian Times, we are a student-based, student-led and (mostly) student-run club of students with a passion for writing and its different forms, ranging from events reporting and commentaries to reviews and exclusive interviews.

The Eagle Eye is our online repository where we engage the school population about issues big and small.

Rafflesian Spotlight, an annual talent show organised by the RI Prefectorial Board has seen some of the best talents the RI Y14 cohort has to offer. Previously, we have seen the likes of magicians, musicians, dancers and comedians and the performances are a mixed bag of delightful surprises. After a long break due to the pandemic, Rafflesian Spotlight is finally back live in 2022. With the finalists shortlisted and chosen, they will be performing for us on Friday, 28 October, hoping to sway our votes. Raffles Publications went behind the scenes to give you an insight on some of the hardships and successes faced by each of the the four teams, that ultimately brought them to their final 4 positions!

Fatih Hamdani of Class 3B and Chang Tse-En of Class 3E are also gunning for the top spot, performing a “song and dance piano remix” of a K-pop song, Into the New World. We were very amazed by their dance moves! We found out that they have had their fair share of challenges while preparing for the Rafflesian Spotlight, including “frustrations” in syncing together. They reiterated that perseverance and resilience were very important aspects in their preparations as they tirelessly put in the hours to perfect their performance. Nevertheless, it was definitely uplifting to hear that, to them, it was not all about winning.

They stressed upon “shar[ing] their love for the arts” through their performance and expressing their love for their hobbies to the audience. Hearing that they were also able to “bond” through “hardships together” despite not being “on the best of terms” at the start was definitely inspiring.

After dazzling the Year 1 cohort with a stunning performance for Teacher’s Day, Samuel Sin of Class 1H and Lim Jing Rui of Class 1A are back, hoping to bring the “Queen of the Night aria” to all Rafflesians. This virtuosic aria, which is part of the famous “Magic Flute” opera written by Mozart, will be whistled by Jing Rui and accompanied by Samuel on the piano. The pair have been working hard to improve since their Teacher’s Day debut, spending long hours rehearsing and doing their best to bring a great concert to RI. This journey has not been without difficulties, in Samuel’s case, “adapting to the keyboard in a short period of time”, or for Jing Rui, “communicating better with Samuel”. The talented duo, although nervous and filled with suspense, are prepared to do their best and are confident that they can do well.

The EOYs may have been a source of immense stress for most of us but these talented musicians had an additional weight on their shoulders: preparing for their upcoming performance in the Rafflesian Spotlight with the hopes of clinching the top prize. Playing as a band for the first time, Reuben Toh of Class 3K, Danial Aqil Bin Irwan Sharin of Class 3C, Eugene Leong of Class 3A and Nigel Teo of Class 3K admitted that the experience came with many challenges. For Nigel and Eugene, it was their first time working together in a band but despite this potential obstacle, Eugene quickly overcame it with his love for music, saying, “I especially love forging new friendships as we practice a lot together.” 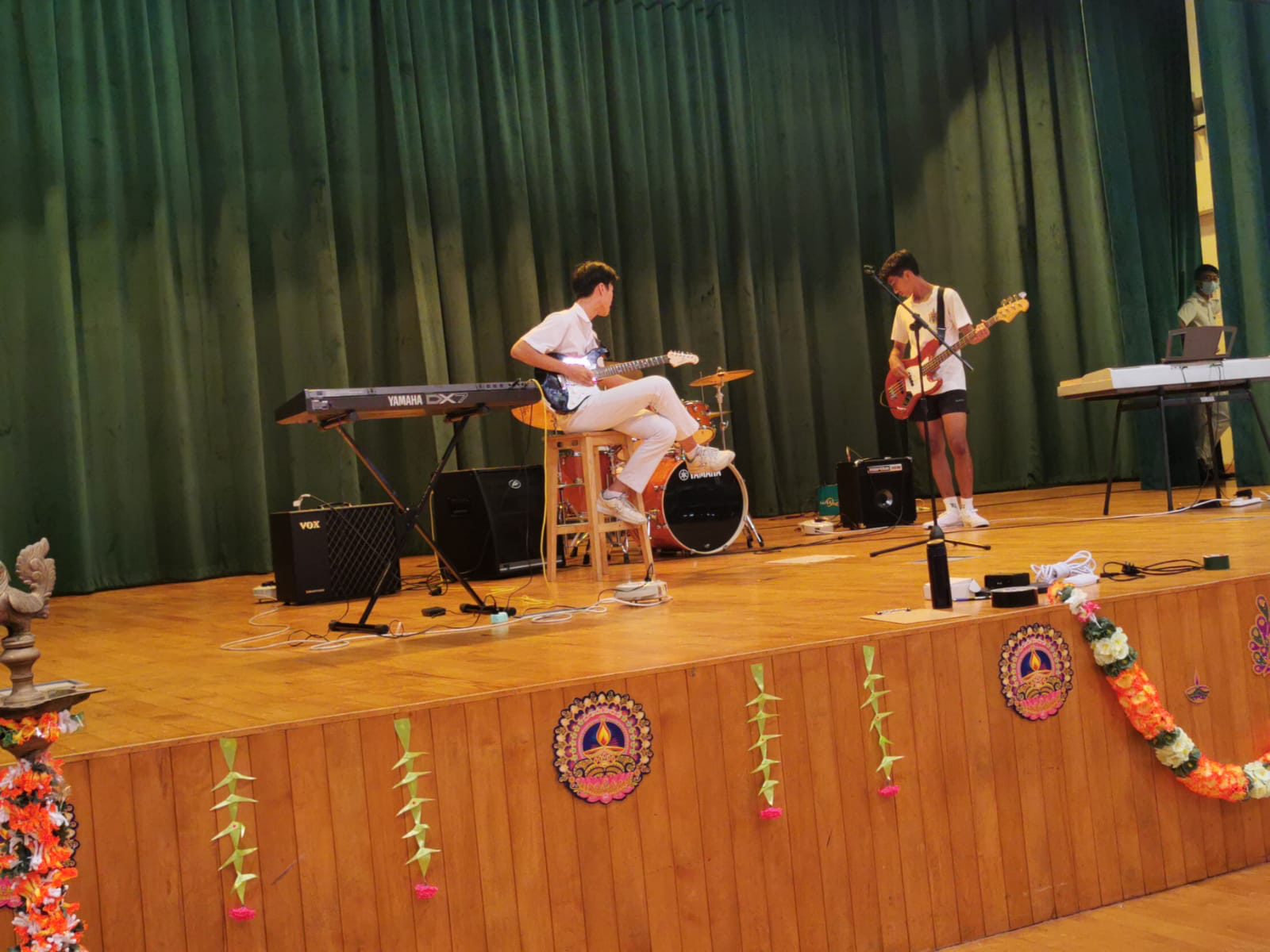 Reuben (left), the lead guitarist and Eugene (right), the bass player onstage preparing for their rehearsal. 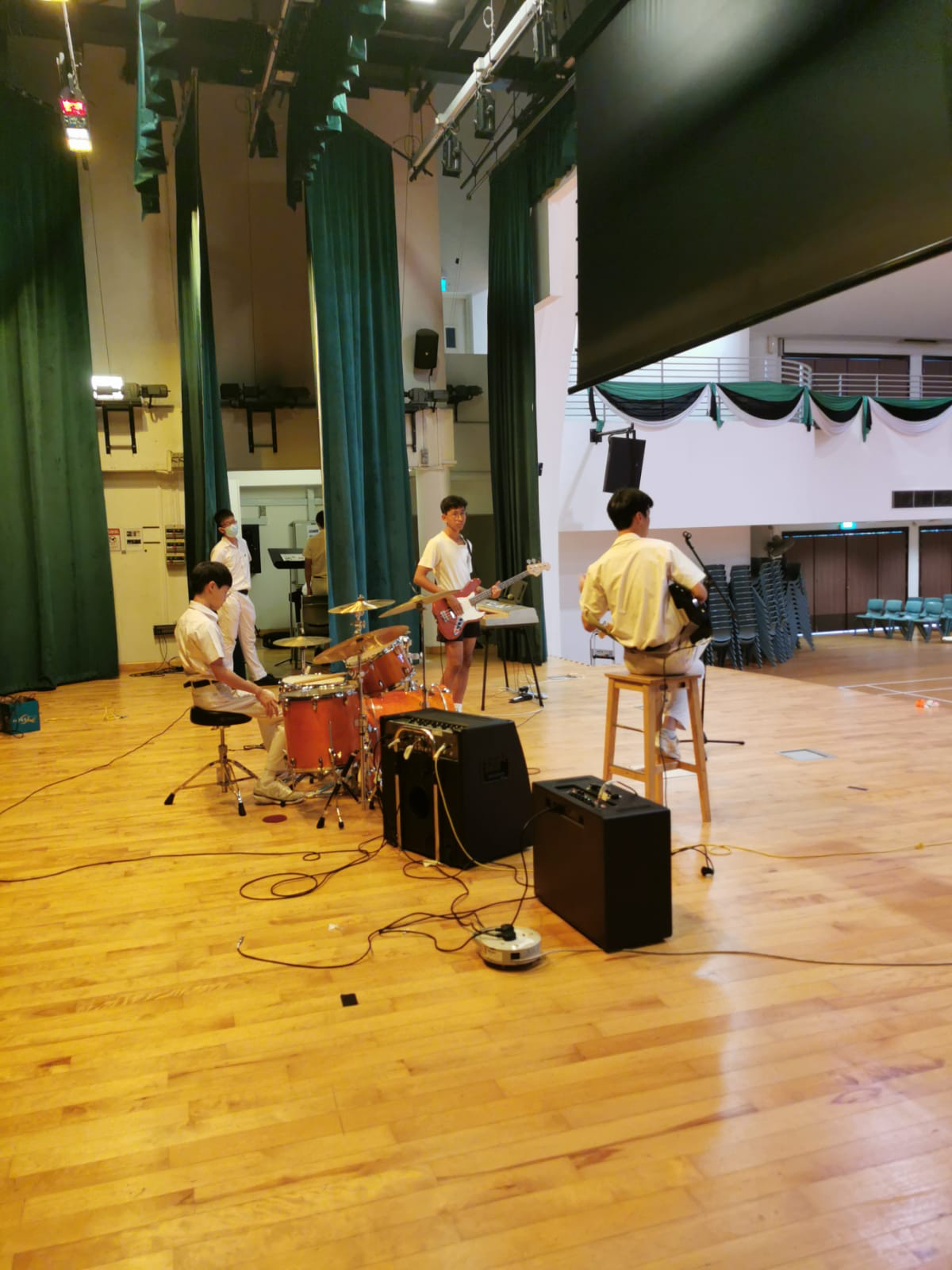 The band working together to rehearse the piece “Are You Mine” by Arctic Monkeys.

Communication was, of course, a key hurdle to overcome and interestingly, the group has chosen to perform a loud pop-rock song, Are You Mine, by the Arctic Monkeys because Reuben explains that this allows the band to communicate – through yelling – on stage during the performance, while at the same time lifting the rock element of the song. Nigel (right) setting a rhythm to help Reuben (left) tune his electric guitar before the performance.

It was heartwarming and inspiring to hear that even though the four had vastly different music backgrounds, it seems as if the 4 members are made to perform together. The band intends to make a big first impression with their unique lineup of Reuben playing the lead guitar, Nigel on the bass, Eugene on the drums and Danial being both the lead vocalist and the keyboardist, instead of the typical lineup with two guitarists. Through this, the band hopes to bring forth the message that “there is no fixed way to present music”. The band also laughingly shared that, “We all seem to hate the song now, after repeatedly playing it over and over in the past few weeks.” But this is perhaps a true testament to just how many times the band has rehearsed to bring us a fascinating performance.

The worst that could happen to a band is the absence of a member due to unforeseen circumstances. With the recent COVID-19 wave, the many performers of the Rafflesian Spotlight have had to grapple with constant changes to their plans. For Isaac Teo of Class 3B, Brice Tan of Class 3A, Nicholas Kim of Class 3C, Methas Tan of Class 2A and Julian Low of Class 3C, this is the unfortunate case. The band will be performing a jazz fusion song titled “Domino Line” by Casiopea and it was very exciting to see how they stood out with their unique choice of instruments, emphasising each member’s individuality.

Regrettably, the group’s rehearsals have been set back by the flu, making their preparations even harder. It is uncertain if the band will be able to perform live for us onstage on 28 October or if a recording of their performance will be screened but nonetheless, their riveting performance will still be one to watch out for!

Swaagat Bikash Saikia from Class 2H explained that as part of the prefects publicity department, they “were in charge of publicising the event and building up hype to get people enthusiastic and… to fully enjoy the experience”. However, with a new COVID-19 wave on the cusp of breaking out, the prefects and teachers have had to navigate many unpredictable circumstances. In the process, much like the performers, the prefects themselves took away many lessons from the experience. Chua Yu Qing from Class 2F shared that he learned that to succeed, “you need to have a more cohesive team instead of one that is doing work separately. So we do work together most of the time.” Both prefects described the entire process as “intriguing” and “fulfilling”! 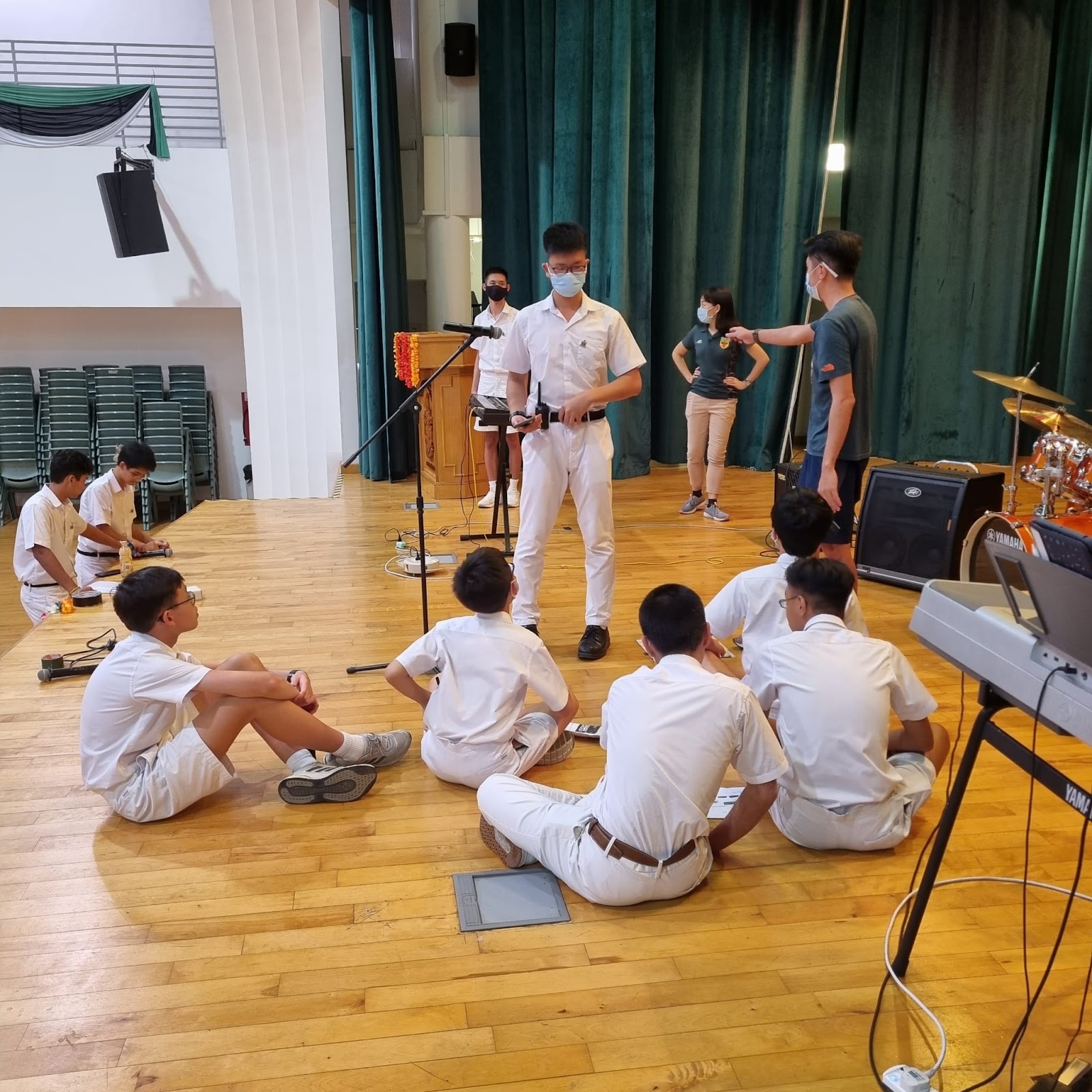 Behind the scenes are also the teachers. Despite the many changes brought about by COVID-19, Mr Shawn Neo, Ms Isabella Ow, Mr Chong Zhe Bin and Mr Phua Zhengjie managed the emcees, correspondences, stage management, prize-giving and voting segments. Reuben’s band wanted to give a special shout-out to Mr Shawn Neo for his assistance. Whenever the bands needed to rent the jamming studio for their practices, Mr Neo would be there to reserve the location and with his help, the band also found themselves with a fully decked out studio. When asked for the most memorable part of the experience, Reuben replied that, “It was our first time using the studio and it was quite fun … recording with an actual microphone and a proper studio with high quality instruments. There was even a green screen for our usage.”

The Rafflesian Spotlight has truly been a work in the making for the student performers, prefects and teachers. The event has grown into a tradition – RI’s way of ending the year with a resounding bang. So look forward to a fantastic show on Friday, 28 October!

My passions are writing. I actively follow a wide variety of sports and especially love playing tennis. View all posts by Ethan Lim